Disguised So Buyers Of Sabu, These Two Men Go To Prison 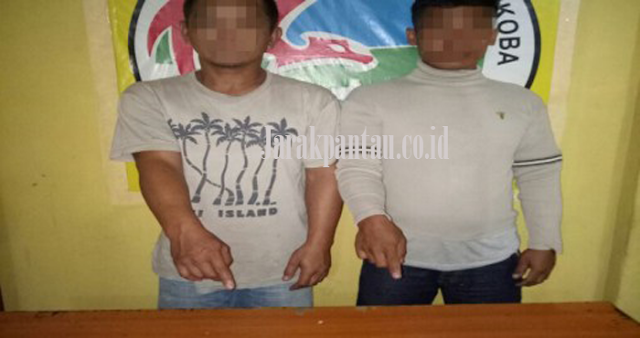 Jarakpantau.co.id - BUDi Simanjuntak (35) and Ali Aka Efen (35), Both these people Citizens Andarasi, Parbalogan Nagori, Java, Simalungun In Ringkus Sat Mapolres Drug transaction was about to when Simalungun Sabu as much as 5 g. The arrest of the Second suspect this happens because Personnel Sat drugs disguised as buyers Sabu Transact in simpang Marihat Ulu Subdistrict Silampuyang Nagori Siantar, Simalungun Regency. Thursday (4/1/2018) Approximately at 20.00 GMT.
"In the arrest of two suspects of the action by way of a Personnel conduct Under Cover Buy/incognito with a way to call the suspects and ordered Bud Sabu as much as 5 grams worth Rp 4.5 million." MS Word. The officer rank of the three beams Ritonga gold served naked drugs at Polres Simalungun To Crew media Jarakpantau.co.id Monday (8/1/2018).


Undercover personnel to call to order as many as 5 grams of Shabu-shabu for Rp. 4.500.000., Directly addressed by the favor. The suspect then directs personnel to the simpang Marihat Ulu Subdistrict Silampuyang Nagori Siantar, Simalungun to meet.


Next Personnel arrived on the scene, it turns out there have been waiting Budi together 1 male friend. Then Personnel find favor.


Then do teransaksi Personnel, but the favor of her asking for money turned over first, then the rod that sabu dikasinya, Personnel showed money lontan as much as Rp 4.500.000., does not directly provide personnel, saying "there are items (sabu) no money".


Later, Bob with his lover was going to take the Savu, they berboncengan driving a Honda beat train. Any personnel waited. then at Approximately 21.00 GMT, Budi came with her friend berboncengan with mengendarain railway. then Bob went down, while his friend was waiting on the train.


Next came to Favor personnel and give the sabu have been ordered it. No provision unexpected moment, immediately Suspects the favor and his friend who were on the train. "The arrest was immediately shared that lead me to my personnel" he said.


We then secured the evidence in the form of plastic clips are 1 packet contains Sabu dressed with black plastic, 1 unit a motorcycle beat white BK 2366 and 1 unit of LG brand mobile phones and 1 sheet of black money fractional IDR 50,000.-


From there we quizzed the suspect, Obtained from which Goods that sabu. Then he got in minds that Sabu pleaded from a woman who is often called the initials "B" resides in the territory of Pematangsiantar.


Personnel who got recognition from the suspects, direct development, the pursuit of the woman. next personnel arrived at the woman's House. But the personnel did not manage to find the woman was in her home. Later the two suspects together the exhibits removed to Satnarkoba mapolres Simalungun for safekeeping and do further penyelidilan. imbuh p. While ending. (Rizal Siregar)