DPO for 22 days, Toni is successful In ringkus Police 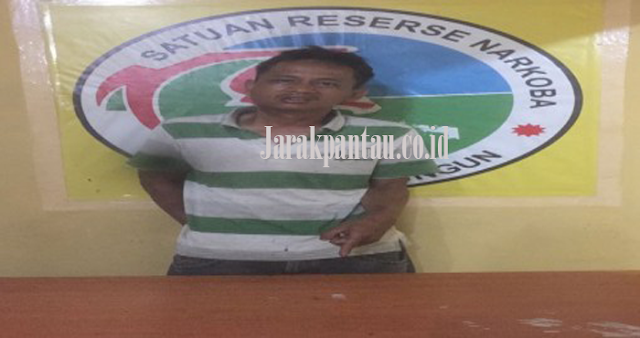 Jarakpantau.co.id - For 22 days into a search list people (DPO) by Police Simalungun Toni (37) made in Ringkus. The suspect's Capture on Saturday (6/1/2018) Around 01.00 WIB o'clock while inside the House in Bayu Sump Nagori, Bandar, Simalungun.

"Toni who became the DPO for 22 days by drug polres Simalungu Sat, on the arrest of the Suspects had previously Bolong diamanka said Visible Drug Police Simalungun AKP.MS. Ritonga to Media this Monday (8/1/2018)

His early Personnel sat simalungun Police Drug gets info from masyaraka, that Toni was at his home in Bayu, sub Sump Nagori Bandar, Simalungun. Some personnel who receive the info Directly move towards to the location.

Furthermore, the Personnel arriving at the House, and in the House found two children (1 adult females and 1 adult male person). Then when the personnel to debrief the boys, then he confessed, named Toni.

Then, the direct Personnel caught Toni. However, when in capture Toni Got do with resistance Personnel yelling "Thief-thief".

From the cries made by toni, local people did not respond, because Residents know if Toni guilty. then Toni successfully secured.

then the suspect along the exhibits were carried off to the Office Sat Resnarkoba Police simalungun to do further examination. (Rizal Siregar).