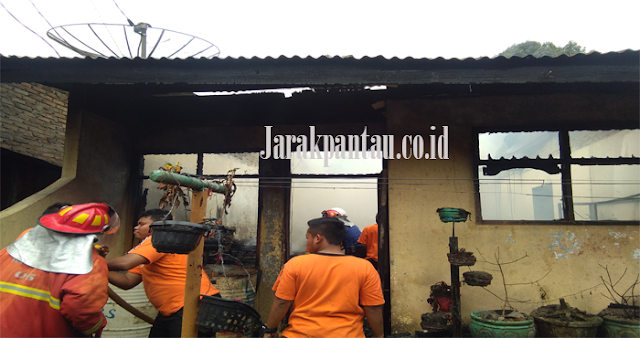 Jarakpantau.co.id - One housing units belong to the uterus Lubis Charred dilalap si jago merah. Note Home warehouse storage of all kerosene Burning is alleged due to electric short-circuit Konsleting. Mon (8/1/2018) at Approximately 10.00 pm.
The information collected from the child's bladder Ucok one Uterus homeowners say. First, I mengecok to turn on the lights.

Furthermore, I do not know if it is the lamp Wayar konslet, and then I smell the charred as Burned wayar. then I searched for the origin of the smell of burning it.

Without my even realizing fire was spreading so quickly, and it burned the roof of the House. Residents who live on site, tried to Help put out the fire and part of citizens helped save goods that are inside the House. Ucok Said.

Furthermore, firefighters in the contact. A few time Damkar Of Pemko and from STTC arrived on the scene. But Dikarnakan House in the Alley, a little menyulitjan to enter into Damkar Team House.

Fire semangkin marak, in karnakan in the House, many of the kerosene inside the drum. The team that had tried to fire right Damkar by connecting the hose. When Water is sprayed into the direction of the fire, the explosion sound very loud.

Duars.. Duars.. The ... Explosion sound 3 times. Turns out the sound of the Drum that contains kerosene was exploding, making Fire semangkin. Almost 1 hour more damkar Team tried to put out the fire. Then you can turn off the fire After gutting the building along with the goods that were in the House.

The results of the radar of the media, Look At the location of Personnel From Polsek, Polres siantar and BPBD as well as Satpol PP Memadkan, to assist fire and securing the situation on site.

Until news is relegated to a desk editor, this event already in by the police and the Party is still in the process of investigation. (Rizal Siregar).