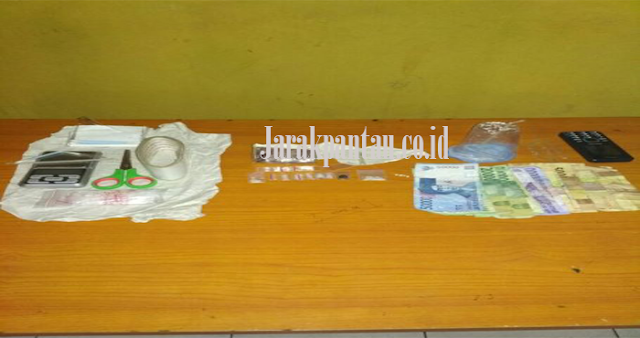 Jarakpantau.co.id - Junika Aka / pelong karna, arrested People Search list (DPO) at the time of the arrest of a suspect Word tampubolon ago and he fled at the time was about to be arrested. On Saturday (6/1/2018) Approximately at 23.00 BST Jon Kero Aka Pelong (37) Crying while on the Ringkus by personnel Sat Mapolres Drug Gang in Simalungun Dame number 34 naromonda Street, neighborhood vegetable garden, district of the eastern city of Siantar.

"The suspect Pelong we Ringkus, karna has indeed stepped DPO, we suspect Never escaped capture in the karna was about to do a criminal act and abuse of Illicit Narcotics" Invisible Drugs Mapolres Simalungun AKP. M.s. Ritonga To crew Media on Monday (8/1/2018).

Originally Sat Personnel Drugs got the info from the public if it Junika aka Jon Kero aka Pelong Roam while passing his House around Savu Street Gang naromonda Dame number 34 Neighborhood vegetable garden Subdistrict Siantar Timur. "the suspect has indeed become Pelong DPO us, because at the time of arrest Feriman Tampubolon ago located around Gang Dame Village vegetable gardens, district of Eastern, this Suspect Siantar also involved therein. But the suspects managed to escape, "Said M.S. Ritonga.

Furthermore, Saturday (6/1/2018) Approximately at 23.00 BST. Personnel who have got the Info directly down to the location. then the shared Community personnel investigations, not long after the personnel along the community saw there were men in the hallway of the House. Personnel then catch the man and be seen his traits Seems similar to the DPO that money.

Karna's position in the hallway was dark. Then to ensure Personnel carried the man into the light. It turns out that it is true that men Named Junika Aka Jon aka pelong kero one suspect DPO.

Furthermore, the Personnel sent suspects Pelong to issue contents in his pants pockets it turns out there is a small clip of Catapult or 1 packet contains Sabu and money amounting to Rp. 190,000.-also 1 unit black Moto brand mobile phone allegedly used to Access teransaksi.

Then the suspect along the exhibits removed to Sat Resnarkoba MaPolres Simalungun to do the process further. Reveals Invisible Drugs while ending. (Rizal Siregar).