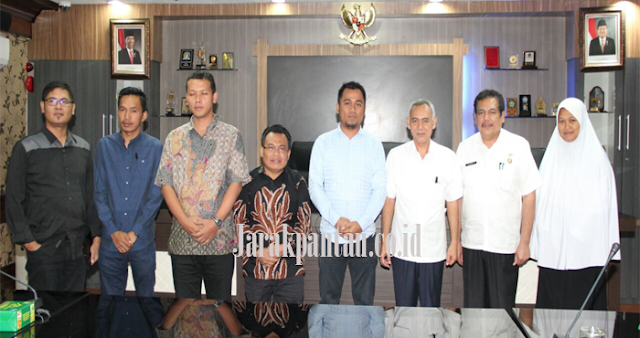 Jarakpantau.co.id - Medan City Government received a visit from members of the DPRD Commission's work 2 Regency Kutaikartanegara, in the Office of the Mayor of Medan, Wednesday (10/1). This visit is received directly by the Mayor of Medan Drs HT Dzulmi Eldin S MSi that is represented by the head of the Agency's financial and Asset Pengelolah area of the city of Medan, Irwan Ritonga.

In that occasion, Irwan describes a brief profile of the city of Medan as a new Metropolitan City in Indonesia. Medan City currently has a population of reaching 2.4 million inhabitants and an area of 26,520 Ha comprising 21 districts and 151 Subdistricts. Medan is also known as the city of multikulturisme this is due to the city of Medan was inhabited by people from many different tribes, religions and ethnicities that live alongside each other peacefully and get along well.

Apart from being the capital of the province of North Sumatra, Medan is also the gate of Indonesia the Western hemisphere and one of the most important regional economy dipulau central Sumatra.

"These conditions have made the city of Medan as one of three new metropolitan city in Indonesia which has the position, function and strategic role as a gateway for trade and financial service activities on a regional basis as well as International Western Indonesia taeniatus. Hence the construction of Medan city directed the city services, industry, trade and education city. " clear Irwan.

Through this visit, later Irwan hopes will better intertwine hospitality for both cities so that they can mutually exchange information for the sake of the progress of the two cities.

"Hopefully from this meeting the increasingly intertwined relationship closely, and be a momentum for us to exchange information and experience for the sake of the progress of the two cities." Please Irwan.

Meanwhile, the leadership of the groups of which is the Chairman of the Commission 2 DPRD Regency Kutaikartanegara, Andi Faisal said the purpose of the visit was to discuss this work with Pemko Medan on the issue of Funding for the results (DBH), for the current Kutaikartanegara feel in the child tirikan because DBH received does not correspond to the realization There is.

"This condition certainly impaired once the wheels of Government kutaikartanegara, because Kutakartanegara drape his life from DBH is." Andi Faisal said.

In addition, the NATIONAL Government. Kutaikartanegara is currently down caused the influence of the global economy. As a result of development has become not the maximum. (Rendy)