Residivis thief Doves in the Capture of police 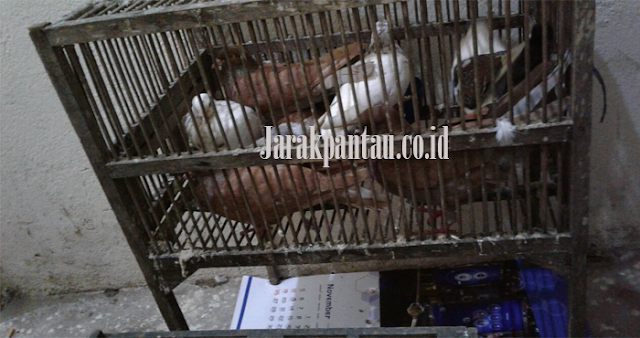 Jarakpantau.co.id - The perpetrator of the criminal offence of theft specialist with pemberatan (curat) succeeded in the capture by team Tekab 308 Polsek Raman Utara. The arrest of a leading directly North as evidenced by Raman IPTU RAHADI., sh., on Monday early morning (08/01) At 00.30 Bst.

The initials in the know principals YDO (25) villagers Rantau Dawn Subdistrict of North Lampung Regency East Raman. Whereas to 2 (two) victims i.e. CRA and PTA are in pursuit (DPO).

Information on the spool (08/01) the incident began when 3 (three) the suspect has committed the theft at the home of a victim named YULIANTO (29) Villagers City Raman Dusun III Subdistrict of North Lampung Regency East Raman, by means of the offender went to the home of the victim and the take 3 (three) the tails of her cage with doves.

However ill-fated the Act suspects in the know by direct victims and screamed "Thief" so that citizens and reaction fishing santak direct pursuit. Lucky alacrity Member Polsek Raman North can save the life of a suspect from a raging time. Losses in appraiser reach 750,000 (seven hundred fifty thousand dollars).

After the suspect we secure, instantly we do development, and the suspect admitted to having stolen as much as making arrests four (4) times the theft in district Raman Utara. And of the development that we managed to catch his other principals namely AGA villagers Rantau Dawn Subdistrict of North Lampung Regency East Raman with evidence 7 (seven) tail doves along with 1 (one) enclosure. Yudy Says

He continued, this time the suspect and evidence secured at Polsek Raman North to further investigation. Yudy Lid (Denny)